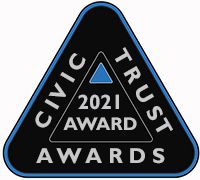 We are proud to have undertaken the groundworks for an award-winning project in Deptford, South-East London. South London House won a prized Highly Commended Award from the Civic Trust in 2021.

The project involved working on an irregular walled site in the Deptford Conservation area. Designed by architects Jonathan and Katherine Pile, the new house has been built on a plot which was last used as a car repair yard. The site is hemmed in on several sides by party walls and sitting over a network of Thames Water pipework. The groundworks needed to take account of the pipework and the historic boundary walls which are actually incorporated into the new house.

We managed site access, excavations, piling and foundations work in line with strict requirements laid down by Thames Water and the project’s structural engineers. As well as ourselves, the project involved a team of specialists including the architects, heritage builders, structural engineers, party wall surveyors, archaeologists and sustainability engineers, as well as Lewisham Council and building inspectors.

The house is constructed from timber and steel, and uses existing brick walls which date back to the site’s historic past. The architects designed the house around a courtyard which creates a haven of peace even though it is in the middle of the hustle and bustle of modern Deptford.

In addition to the Civic Trust Award, South London House won a RIBA London Region Award and was shortlisted for RIBA’s House of the Year 2019. We’re delighted to have laid the foundations for the project’s success!

Get in touch now to see how we can help with your next piling and foundations project.